The latest exhibition—Tower of the Sacred and Ordinary—in Toronto’s FENTSTER window gallery that I curate was created by New York-based artist and architect Daniel Toretsky. The premise of his installation is based on a projection of North America in the year 2221 when economic and climate collapse have rendered our cities unliveable. For the window, the artist designed a monumental tower inspired by traditional European silver havdalah spice boxes often fashioned like medieval castles complete with flag-topped turrets. As he explained his concept in an interview with Hey Alma: “. . . in the future we’ll build giant spice boxes to carry our memories and pull them around through the wasteland of climate collapse, desperately clinging to the better world they imply and building more memories into them as we go.”

This project is also informed by an undercurrent in the collective Jewish consciousness of romanticizing places from the past. A yearning persists among many Jews to return, for example, to the mythologized pre-war Eastern European shtetl, the Moroccan mellah neighbourhoods of the 1800s, Kensington Market in the 1930s, or 16th century Tzfat. Toretsky asked a diverse group of North American Jewish artists how our current communities might be memorialized by future generations. He received a wide range of responses which he then combined and turned into whimsical three-dimensional drawings filling his mobile structure. We’re posting their contributions on our Instagram page.

Sebastian Schulman, Executive Director of KlezKanada (our co-presenters of Toretsky’s exhibition) truly embraced the prompts and shared deeply poetic reflections that incorporate the five senses, as does the havdalah ritual. Although only part of his contribution informed Toretsky’s drawings, we’re so pleased to share his entire piece of writing here in Niv because it is so evocative and moving in and of itself. I love all the layers, literal and figurative, around this project, which has woven in many voices and inspired other forms of artistic creation from writing, to music, to even a short film.

A peak into the creation process of Tower of the Sacred & Ordinary by Daniel Trotsky.

Beymheyru beyomeynu. Speedily and in our days. Several times a day, the Jews ask their God and the God of their ancestors to bring about the end of days, and to be quick about it. During these days of plague and upheaval, it’s not hard to imagine that the messianic era we’ve all been waiting for might not be the earthly paradise we’ve been expecting. What if the yoym shekuloy shabes—that everlasting Sabbath day that we’ve been promised—isn’t full of the giddiness and overly loud chatter of Friday night, but rather the long stillness of a Saturday alone? What if we missed the chance to prepare ourselves and our food ahead of time? What if we miss the week’s conveniences and feel not at rest, but resentful and powerless once bereft of our technology, our money, our mass transit and mass communications? And what if, as the endless hours stretch on, we miss our messy, vokhedik lives?

In a world where havdole may never come again, here are the memories I stuff into my spice box. May their ephemeral scents bring comfort on the journey ahead.

Scents: fresh dill and young walnuts; salt water left over in a plastic dish that once contained hefty cubes of sheep cheese; overused frying oil; the daily cloud of industrial smoke from Minsk Bread Factory No. 5 that arrives every workday afternoon; the stale air of well-lived-in apartment issued to its inhabitants by a Central Planning Committee decades ago; the thick smell of pine in the Belarusian forest; the deep and sticky black soil of Bessarabia; the linden trees that bloom in May with an olfactory cacophony, like an aromatic orchestra tuning up just before the symphony of summer arrives in Chisinau . . .

For the Jews of Moldova and Belarus, it seems like the world has already ended twice before. Above a certain age, Jews here don’t talk about the Holocaust, but just The War, The War, The War. They speak of their particularly horrible Jewish experience of The War, the mass murder, the blood, the sorrow of The War. They speak of the Red Army that arrived heavy like a force of nature, a destructive but redemptive natural disaster, that liberated and occupied with the same crude blow. After The War, Jewish life endured scarred and transformed, in many ways an unrecognizable ruin, in other ways a beating heart, a vital tradition that outlived yet another khurbn, another one of history’s calamities.

Their second, smaller catastrophe in recent memory? Imagine falling asleep in one country and waking up in another, all without leaving your bed. The collapse of socialism, the rending of a worldview and way of life, the mass emigration of Jews (once again) from these lands, has been an intensely dislocating and deeply, deeply ambivalent experience for this region’s Jews. What does the freedom of the free market mean without security, stability, or the presence of so many of one’s friends and family?

Europe is a graveyard, say the Canadian/American/Israeli Jews who come to visit these communities. They cannot recognize or value Jewish difference. And so they give generously, in the hopes that Moldovan and Belarusian Jews might learn to become like them, to fix the mistake of history that keeps them speaking a dead language and living among the dead. But the joke’s on them because there is no place more brimming, buzzing, teeming with life than Chisinau’s Jewish cemetery. Lush and green, the cemetery vibrates with the sounds of a thousand species of insects. Everywhere something is crawling, chirping, growling. Huge leaves droop lazily from heavy vines. Thorns and nettles and brambles poke and scrape and scratch. It is hot. The heat of living things breathing and birthing under a triumphant and unencumbered sun. And the stones! So many stones that tell the stories of so many generations. You’ll swear you can hear them talking, the wild interrupting chatter of thousands upon thousands of Jews speaking in Russian, in Romanian, in Yiddish.

When the world ends, as a Jew I’ll carry my memories of these communities closest of all. What does Jewishness look like after? Look no further than here.

Spice Box No. 2: The cities on the coast

The scene of my early childhood. It’s sunshine and sprawl and greasy peysekh beyglekh.

I’ve often taken American tourists to find their ancestral shtetlekh in Eastern Europe, scouring maps, finding forgotten and far-off small towns. Invariably, the tourists will stumble into a feeling of not-quite-nostalgia, an eerie sense that everything around them is at once foreign and yet familiar. That here is their true home. It’s easy to either overly romanticize this moment, or, conversely roll your eyes at the problematic cliché these encounters have become. Ironically enough, it’s the same feeling I get whenever I’m in Los Angeles. It’s a place that should feel familiar. I can just grasp at the memories of what this city must have looked like to my kindergartener self. And I can just make out my grandparents’ ghosts as they forever play out the family dramas at the corner of Pico and Robertson. No matter how many times I go back, going to L.A. still feels like a trip to the alte heym. That is, if the Old Country was filled with palm trees and flowers and billboards for the latest Netflix TV shows.

The City. Grow up here—okay, I’ll admit it— grow up in the suburbs, and New York will always be the standard by which you judge any other place. There’s no place that is as much of a place as The City. And there’s no place whose chaos will immediately put your mind at ease like New York. There’s no place like home.

It’s 2005. You’re wandering the Old City of Jerusalem, feeling anything but holy, masochistically going from shop to shop looking for the perfect gift for someone that broke your heart. The frum woman behind the counter zeroes in on your exhausted and sweaty face. I can’t take any more haggling, you think. In tourism-board-English, she asks, Where you from? New York, you answer curtly, hoping to stop the conversation before it begins. Akh! she exclaims, suddenly in Yiddish. Nyu-york iz a heylik shtikl erets-yisruel! New York is a holy piece of The Land of Israel! What you doing here?!

Scents: A regn mit a shokolad. Ot azoy shmekt Montreol. Rain and chocolate. That’s the smell of Montreal, or so says my daughter, then age seven . . .

What can I say about Montreal that hasn’t already been said? That I haven’t already said. My love for this place is inexplicable to the point that it’s almost silly. I’ve walked the island’s seemingly endless sidewalks in every direction, hitting the water on all sides. Sure, you might love those hot, yeasty three-in-the-morning bagels, but have you ever seen the northern tip of boulevard St-Laurent as it ends near a playground in Ahuntsic? Pretty underwhelming, but hey, I’ve walked there.

When the world ends, I’ll remember that I lived in a fairly mundane part of town. “Salt of the earth,” they called it in the Gazette. A quiet place, mostly immigrants and young families. Nothing special. Nothing special about its quintilingual Jewish library, about the apartment where one of the most imperious and globe-trotting Yiddish writers of the 20th century lived his last decade, nothing special about its beloved amateur Yiddish theatre, about the branch of a huge corporate bank that provides services in another five languages and serves free apples and honey the whole month of September, nothing special about its row of overpriced, mediocre kosher restaurants, about its Sephardic shuls, and Yiddish-speaking streets. And this is the fourth most Jewy neighbourhood in town?

Tower of the Sacred and Ordinary by Daniel Toretsky is on view 24/7 at FENTSTER @ Makom (402 College Street) into October. To hear other artists reading their contributions to the project, watch the online exhibition opening here. 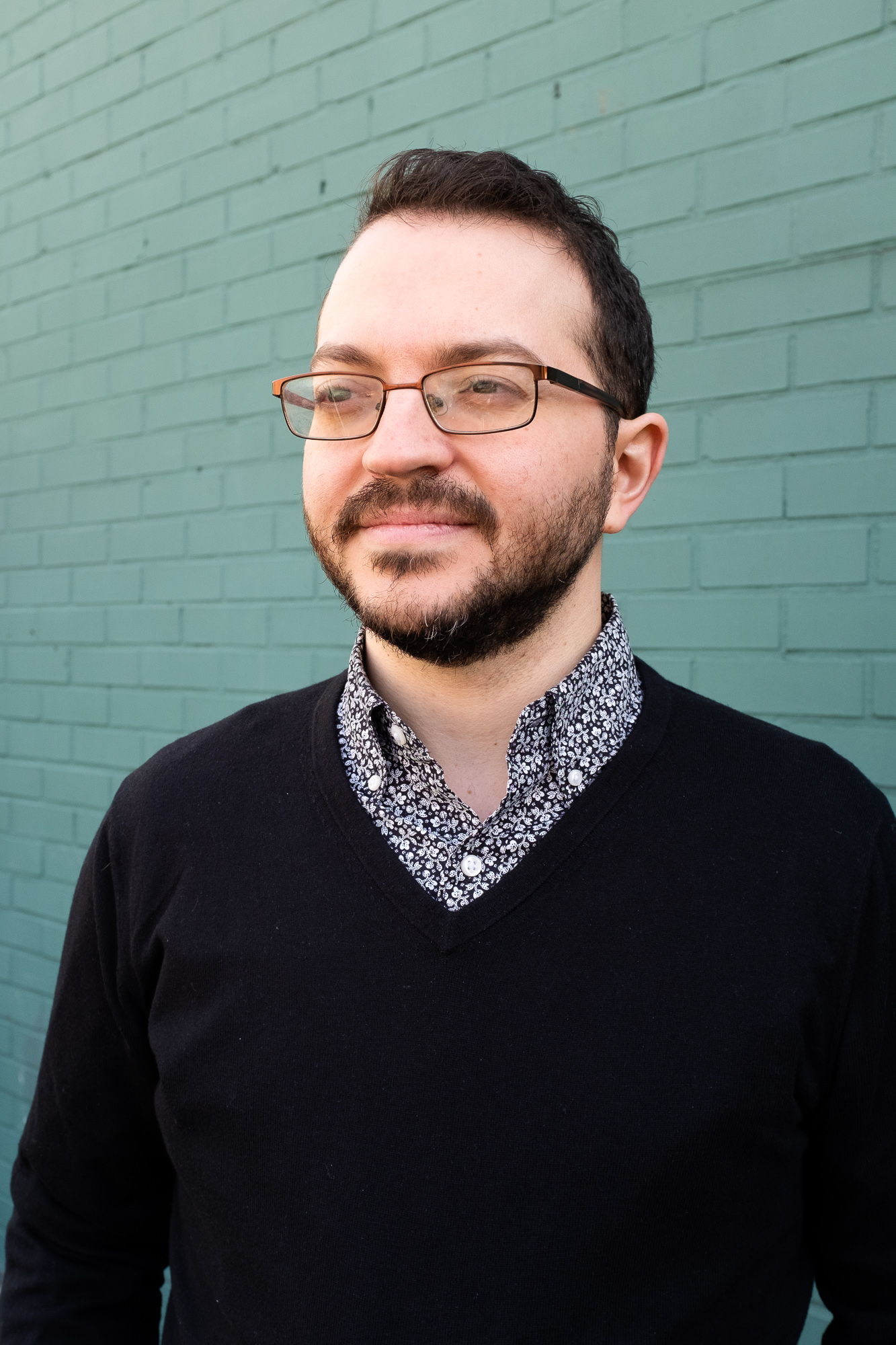 Sebastian Schulman is a literary translator from Yiddish and other languages, and the Executive Director of KlezKanada, a leading organization in Yiddish arts and culture. His original writing and translations have appeared in Words Without Borders, Electric Literature, Tupelo Quarterly, The Forward, and elsewhere. His translation of Spomenka Stimec’s Esperanto-language novel Croatian War Nocturnal was published by Phoneme Media in 2017. He lives in Montréal, Québec (Tiohtiá:ke, unceded Kanien'kehá:ka Territory).

A mother's calling to destigmatize addiction in the Jewish community