In 2013, spurred by the loss of her mother, Sabina, Isa Milman—an American-raised, British Columbia-based writer—began researching her family’s history in Poland, namely, Kostopol. Specifically on the hunt for her aunt Basia’s lost poems, Milman chronicled trips to Poland with her husband, visits to museums, and conferences; retracing and unearthing the atrocities her family faced during WWII. The reader follows her parents to the gulags, and learns how Basia was murdered along with Milman’s grandmother, and the rest of their family.

On October 5, Isa Milman’s memoir Afterlight: In Search of Poetry, History, and Home will be released. Through language, she tries to remember, and to honour her family, and hopes their story will “lessen future atrocity by saying, ‘we can’t do this, this can’t be done, we have to do better.’”

It’s so horrific what happened, but were there any moments in particular that you felt you understood more? Or were more evocative to you?

The act of writing was tremendously eye-opening for me. I had to have my eyes open, I had to appreciate in a very different way what my parents lived through and their whole experience together. They were together from such a young age, and throughout the war they were together.  [During this process] they weren’t my parents so much. When you’re young you say [of parents] Oh, they’re such a pain in the neck; I didn’t understand them, I mean, I did understand to a certain extent, but it was very hard to always empathize with them. With writing, I came to have a tremendous compassion for my parents, even talking about it makes me sad, because what they went through is quite phenomenal. I always put myself in their place, and I can’t imagine what I would do and how I could have coped.

And just understanding more about what happened after the war to my parents and how they were treated, in terms of whether or not they were considered to be survivors was a huge challenge. I didn’t really appreciate what they went through. It was only in the research that I did by speaking to historians, and people who are far more immersed in that story, who explained to me what their experiences were. We know what they lived through was unbelievable and then to be told, well, you were in paradise compared to what we lived through, that whole hierarchy of suffering is so hard to deal with. Even towards the end of my mother’s life, when I described in that newspaper interview she did, just a few years before she died, she said, “Well, maybe you want to talk to the real survivors, because I was in Siberia with my husband, I was lucky, you know?”

There’s a beautiful moment when you go back to the chestnut tree in Poliske, Pohorelowka, where your family had their portrait taken. And you have your own almond tree that you planted in your backyard years before the trip; it makes for a full circle moment and a continued connection to your family’s history and the present. Did you ever think about nature as a symbol when you were travelling or writing?

Sometimes things sneak up on you. I didn’t make the connection when we planted the almond tree in my mother’s memory in our backyard. And it was an epiphany of being in the garden when everything was done and I’m trying to figure out a way to say, This is the end; how do you end this story?

I often forget about nature; my husband was a huge naturalist. He grew up in nature, I grew up in a very urban environment, protected from nature, nature was the force that could harm you; everyday, everything would harm you. I don’t think I’m unique, as a child of survivors, they want to protect their children so desperately, and God forbid, something should happen. Right? So part of that protectiveness was not really going out a whole lot in nature as a child, my own inclinations have grown since I’ve been an adult. My husband had a tremendous influence upon me, in going out in nature with him, he was my guide, and teacher. It was a great comfort because he would point things out and explain things and I could just feel at ease in nature. So he was the one that did the whole garden, the garden was his domain. It wasn’t mine. Now I’m struggling because I have to deal with it. 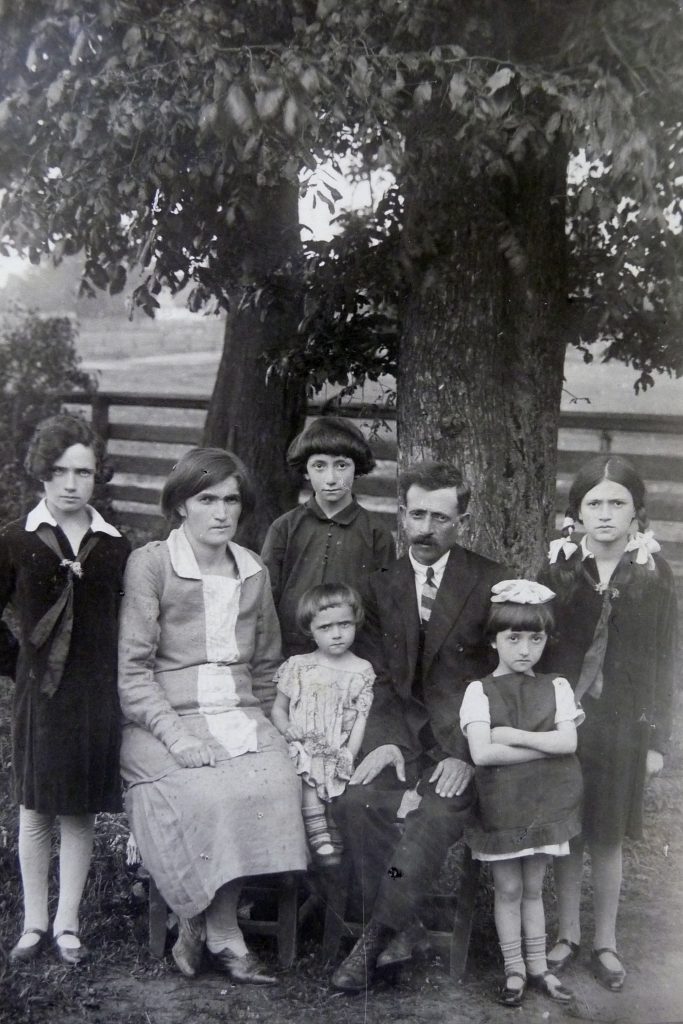 Kramer family in Pohorelowka, 1927. From the author’s personal collection.

It is rare to find a partner who believes in you, who supports you, who continuously stands by your side, as your husband did throughout this process.

Losing him was the biggest tragedy of my life. It was unexpected and it happened almost two years ago. The book is a tribute to my husband, and he almost didn’t come, you know, he always said no this is your story, but took it on and he made it his story too, we had this phenomenal experience together. I’m so glad that he decided to come, and sort of the last experiences of our lives were all about this.

He made everything happen for me. He made poetry happen for me and art happen, he really was dedicated and committed to helping me become who I am. It was the greatest gift that I could ever have experienced in life; he was my treasure. I’m just glad that we have this, and he didn’t even want to be in the book. He said just leave me out of it. And then, a good friend of mine who was a wonderful writer and teacher, who worked with me, chapter by chapter, she said to me, “oh no, Robbie has to be in the book, we have to have him.” Can you imagine the book without Robbie?

Afterlight is a moving and detailed account. We’re with you from the very beginning of your journey and your parents’ journey to the very end. At the beginning of the book you start by talking about the word afterlight, and how you came to it by surprise. What does that word mean to you now?

I was just thrilled because I didn’t know the word, I had never heard of it. I struggled with the title for a long time, and it changed many times. Originally Searching for Basia was my title and then it was Sabina and Her Sisters, and then, I don’t know, nothing felt right, because it’s about many more things. So, afterlight, meaning the light visible in the sky after sunset or a retrospective look back in history, I just thought, this is perfect. Because when I think about my parents and family’s experience, there was so much darkness, and yet there’s light that remains even when the sun goes down. 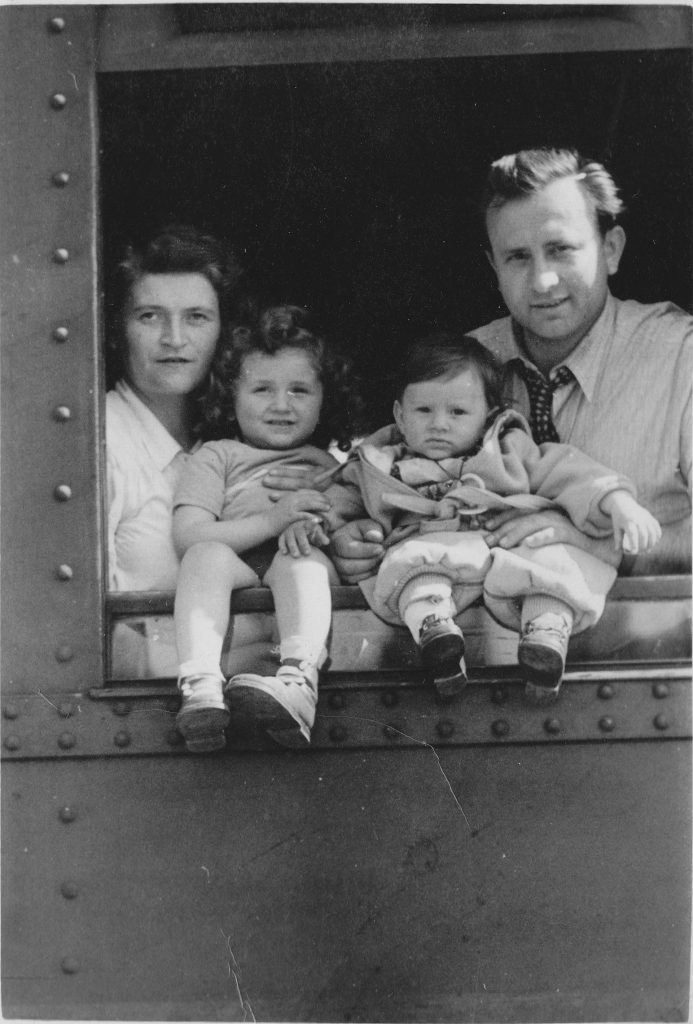 Sabina, Olek, Estera and Isa depart Germany, May 1950. From the author’s personal collection.

In the book you reference Don McKay’s field notes on betweenity (“decries necessity of having to constantly think in an either/or world and makes a case to include both/and as part of our experience”) as a sort of guide in regards to the complex relationship you have to Poland, it’s history, antisemitism, and the Polish people. What is your relationship to betweenity in regards to this topic today?

I was so happy near the end, when you found Basia’s work, it wasn’t the poem you had hoped for, but what was it like finding her writing?

It was disbelief, I was truly not expecting it. I had so much disappointment and I had come to the point where I just accepted that I was never going to have anything from her in writing. It was almost serendipitous. I’d just finished writing; I kind of had done the book; I was starting to look for publishers already. I was still so keen on the subject; spending so many years researching and thinking and writing and talking to people and all that, I wasn’t ready to give it up. I had heard about this book [Jabotinsky’s Children] that was being written by Daniel Heller and I tried to get a hold of it just for my own interest. Because I knew my parents, Basia, and Pesach, her husband, were all members of Betar [a Zionist youth movement]. And I was curious about what led them to join Betar. And I wanted to know more about Betar, I knew nothing about it.

Heller sent me the whole piece, it was written in Yiddish. Daniel Heller was amazing. He wrote the translation out for me and sent it to me. She’s writing about what it is to be a woman in Betar. Her husband Pesach was already the commander of the Betar unit, or whatever you call it, the troop, in Kostopol. By this time, she’s already married, imagine, she’s 18 when she wrote that. To read what she had to say about being a young woman and being in in this movement and what’s wrong with this movement; the whole feminist crie-de-coeur: why can’t we have the same opportunities to lead that men do. I felt that she was so modern. It still is a thrill to have something of her, because that’s it, that’s it besides three photographs, that’s it, that’s all we have.

In the book, you speak about how hard it was for your mom to talk about her sister.

To an extent that I wasn’t even fully aware of, and I talked about that too at the end, about how I was not tuned into her pain, and what it means to lose a twin. It does feel like it’s different than a sibling, it’s a very special relationship. And I didn’t really appreciate it during her whole life. So now I do a lot more. 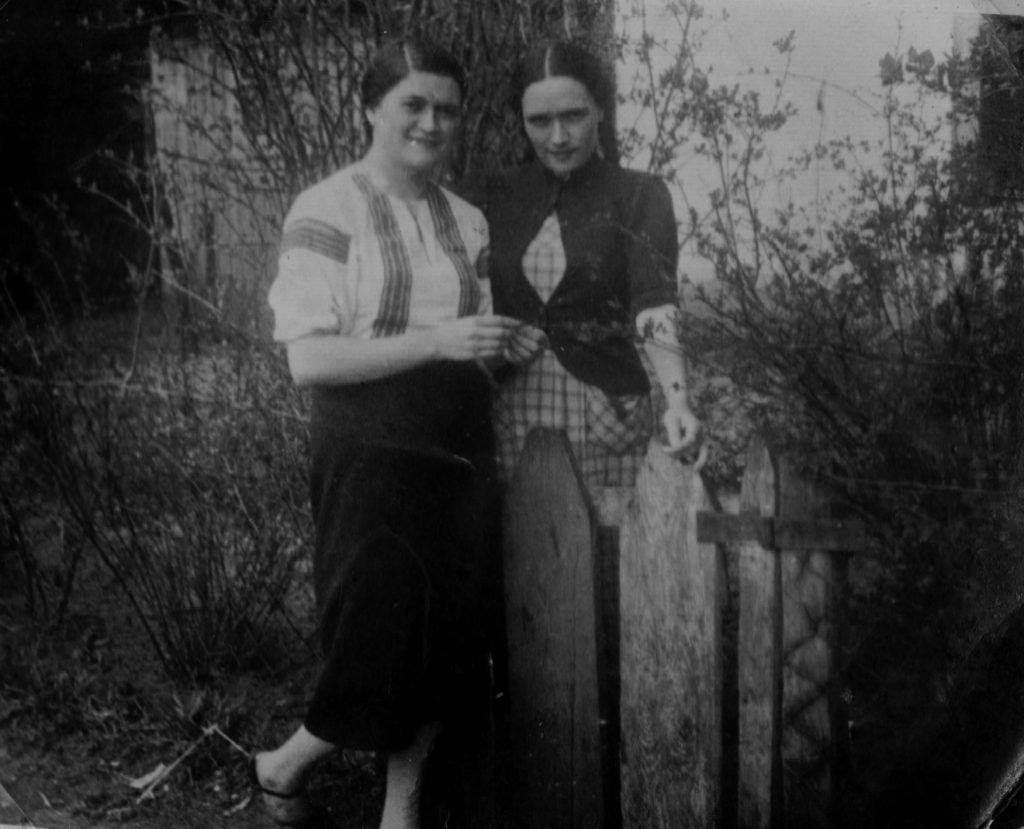 Earlier, you mentioned the title Afterlight came to you as a surprise. What other coincidences or surprises did you come across?

Gosh. Well, the surprise of my cousin having that family photograph in Amsterdam. That was a gigantic surprise, I mean, I was floored. I was completely stunned to see that picture. It was amazing to me. And that my cousin had it, and she assumed that we all had seen it, that we all had copies, none of us had a copy, nobody knew that photograph existed. Going on this journey has been an amazing experience for the whole family. In many ways it brought our family together; our family’s quite dispersed.

And now you have a historical document that will last forever, and bring your story to the public’s attention.

It’s for the world now, that makes me very happy.

The following interview has been edited for length and clarity.

The history of Jews and chocolate