Your home for Jewish expression

Founded by good friends J-Rob and Hoai-Nam Bui, Triple F Kitchen was created with the intent to explore and celebrate the founders’ respective cultures. Through the Museum of Jewish Montreal’s Microgrants for Creative and Cultural Exploration series, J-Rob and Bui presented an online cooking workshop teaching attendees how to make a brisket spring roll. A dish they created to reflect J-Rob’s Caribbean and Ashkenazi heritage, and Bui’s Vietnamese one.

For J-Rob, as the museum notes, “cooking foods connected to his Black and Jewish cultures has been a way to reclaim and reinvent traditional spaces that he doesn’t see himself represented in.”

Outside of the kitchen, J-Rob is a multi-disciplinary artist, with a focus on music and spoken word poetry.

I sat down with J-Rob (virtually) to delve further into the ingredients that gave Triple F Kitchen it’s name: Friendship, Fusion, and Food.

How did you and Hoai-Nam start Triple F Kitchen?

We lived in a duplex with around eight of our friends. There were four on top of us and then on our floor there were five. We did a lot of communal cooking. I did my own cooking workshop in the form of a dinner party because I set out to create the true Montreal sandwich. Because I feel like we don’t have a sandwich, you know we have smoked meat, and that’s apart of Montreal, but I wanted to give something that was representative of all of Montreal,.I got smoked meat, and then I did a Caribbean spice dry rub, and then I made my own special mustard with horseradish, and I forget the rest of the ingredients, but I threw that together and I called it the Robbie-J. I had a bunch of homies over and that was the first time I actually met Hoai-Nam because she had just moved here for University and she was a friend of one of my neighbours upstairs. About a month later, she moved in, and we were talking about that night, talking about cooking in general and our relationship to it. And literally, I was thinking it when she said  she said we should make a dish that puts all of our cultures together.

Have there been any dishes you’ve made that haven’t worked?

So far we’re hitting four-for-four. Everything we’ve made has been really good. That’s the positive of doing fusion, you just have to take your favourite parts and find a way to make them work together.

If you were to start exploring gefilte fish that’d get you into pretty testy waters.

Gefilte Fish is very hit or miss. I’m not sure how we could flip that but I’d love to try.

During your event you spoke about how you’re finding yourself and your identity through this process and through cooking and fusing all your cultures together. When did you realize you had to do it yourself?

It was definitely a very recent revelation. What really invigorated my current love and passion for not just Jewish food, but Jewish culture, was actually the Pittsburgh synagogue shooting at The Tree of Life. I felt a lot of secureness and safety in my Jewishness, of course I experienced antisemitism before but I’ve never had that part of my identity threatened before. It just kind of puts things into perspective for me. I thought of my great-grandmother who I was really close with and she worked a lot, she was from Germany, she worked to have this [Jewishness] be a source of pride for her and my journey is definitely going to be a lot different than hers but it’s still equally as important. From there I took  more of an interest in Jewish culture, and our philosophical/religious views. It was then when I said to myself this [my Jewishness] is in my control.I felt on the day of the Pittsburgh shooting, no matter how anyone else feels about me and my Jewishness doesn’t matter anymore, because I know I feel connected to it.

During the event there was a real sense of community and celebration. That must have been so nice to see, especially over Zoom.

It was really cool ,from faces that I did see, some of them were older women  and it was so cool to see them so proud and happy to be listening to me because I wear this [referring to the large Magen David necklace hanging low from his neck] wherever I go, and sometimes it’s the older generations who are kind of like, why is he wearing this thing? So it was cool to have my own space to feel validated in some ways. And people were just excited to eat this. And it makes me imagine—I don’t think we’re too far from a reality in which there is a black Vietnamese Jewish kid being born, so to imagine that very kid coming across this one day maybe and being like, holy shit, I feel seen right now.

Prepping the ingredients for the brisket spring roll. Photos of the dish courtesy of J-Rob.

Do you have any favourite dishes that celebrate your cultures and your family that you still enjoy?

On the Jewish side: horseradish, gefilte fish, and I love latkes. I make my own latkes, not me trying to flex, but they’re some of the best I’ve ever had.

Do you put onions in them?

How do you feel about applesauce and sour cream or is it just one or the other?

I’m all in, applesauce, sour cream and I put either jerk or all spice; gives them a little kick.

I also love oxtail. I can eat oxtail every single day; three times a day for the rest of my life and not be sick of it, Jamaican patties are good, and curry chicken, it’s just classic.

Did you ever think Caribbean food was separate and/or a part of Jewish food?

I always affiliated Jewish foods with the food that I had on high holidays. I always understood it, but you know, for me, I’m the first generation that was born in Canada. What really is, Canadian cuisine besides poutine? Since we have so many different cultures everywhere we have labels for everything: this is Caribbean food, this is Jewish food. I always understood things to be different because I had access to so many different types of things, outside of my own culture, like a Mexican spot.

And now you’re just saying screw you, I’m blending it all together. 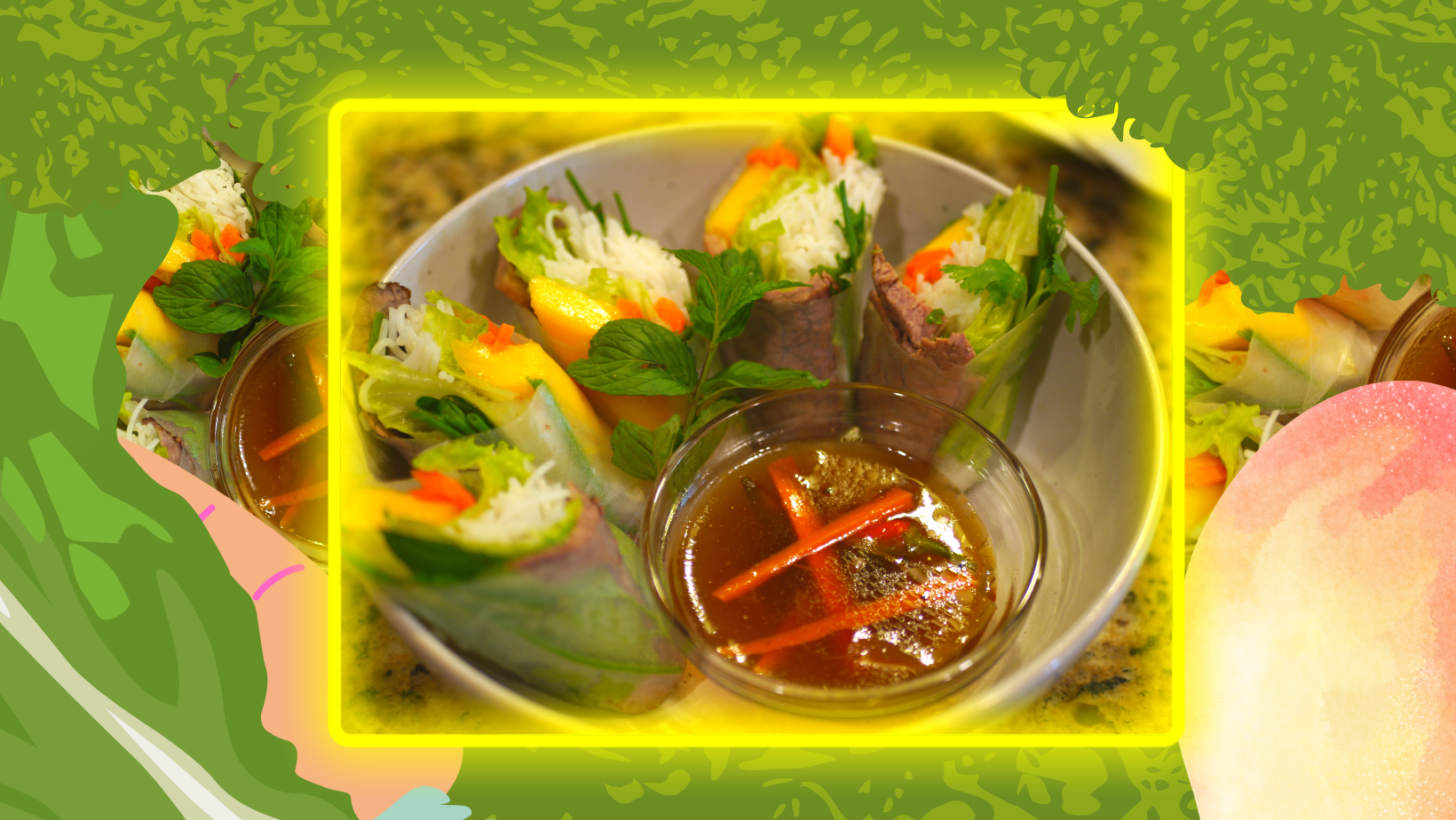 The brisket spring rolls are ready to be devoured. Photos of the dish courtesy of J-Rob.

How was your experience working with the museum, and being part of a cohort?

It was really rewarding to have so much interest and support from both the cohort and the museum. It really helped me in a lot of ways that I didn’t think I needed. I’ve become more connected to the Jewish community.

Were there any challenges you had with the Zoom?

It was difficult at first because I didn’t know what this was going to even look like,  but thankfully The Wandering Chew exists and Kat Romanow, she’s one of the founders, helped me a lot, and I watched a few of her [Zoom cooking classes] and  I really understood how we could do this.

Header and feature images designed by Orly Zebak. The Triple F Kitchen illustration in the header is courtesy of the Museum of Jewish Montreal. The photos of the brisket spring roll dish courtesy of J-Rob.

My Mother Tells the Story of My Birth