“You were supposed to be born January 23rd,” my mother said.

I hadn’t entered the world yet and already I’m wrong.

This is how my mother began the story of my birth, her back to me, standing on our yellow-metal step stool as I handed her our good china to be replaced in the kitchen cabinet in our two-bedroom Bronx apartment.

It was my twelfth birthday. Everyone was seated at our dining room table, talking at the same time: my parents (at opposite ends), my younger brother, my mother’s sister, her husband, their two children, and my best friend Karen, from the tenth floor. We lived on the first so we could jump out the window in case of a fire, my mother always reminded us.

After cake, presents, and twenty minutes of Jewish goodbyes─kissing and crying over when we’ll see each other again─my mother continued the story of my birth, “On Friday, Christmas Day, your father has this idea to visit his Hungarian cousins, Morris and Irna, in Great Neck.”

I sat beside her in the living room on the mauve linen couch upholstered by my father in his shop, Plaza Decorators in Queens. It was owned by my dad and his brother, uncle Nick. My father was sitting in the club chair he reupholstered with beige tapestry. My eight year-old brother was in the bedroom he and I shared, building a Heathkit ham radio. Another reason for my mother to label him a genius.

“You know what a trip to Great Neck is from the Bronx?” my mother asked.

“It’s not so bad,” my father said. “You take the Whitestone Bridge to Parsons Boulevard, and if you go in the right direction you don’t end up swimming in the Long Island Sound.”

“When we left their apartment, there was a blizzard outside,” she said, as if rapidly falling snow occurs indoors. After nineteen years of marriage, my mother is terrific at ignoring my father’s humour. He wanted to be a history teacher. My mother would have made a terrific lawyer. Their lives never offered such choices, one of the few things they have in common.

“The U.S. was at war,” my father interrupted. “The British were bombing German cities. France was occupied and the Japanese were sweeping through the Philippines, Manila, and Singapore.”

“The snow was already a foot deep.” My mother became Sarah Bernhardt, “I was wearing suede pumps, thin stockings on my legs and the car was five blocks away. The wind blew straight up my skirt.”

“It’s tough to find a place to park in that neighbourhood,” my father added, “but it was a nice blizzard. My cousin Irna made real Hungarian food, the kind my wife never makes, chicken paprikash. Potatoes in sauerkraut.”

My mother rolled her eyes.

“At three in the morning I woke up and exclaimed, ‘Andrew. Look what you did to me.’”

“I told him ‘We had to go to your cousins?’ I picked up a bladder infection from the cold. I peed pink.”

She called her mother, my grandmother Tillie, who lived within walking distance on Fteley Avenue. “My mother said, ‘Rosie, your water broke. Tell Andrew to take you to the hospital. Fast.’ What did I know about my water breaking?” my mother reflected. “Certain things were never discussed in our family. Thank God the nurse in Bronx Hospital told me what to do. ‘Make believe you’re a dive bomber like in the war. Push harder. Push.'”

“The Nazis were already killing Jews, and here we had gas rationing.”

“The next day, December 26th, after the noon siren, you were born. Five pounds, fourteen ounces. A month early.”

My birth certificate issued by the New York State Department of Health indicates I was born at 3 p.m.

“Your birth certificate is wrong,” my mother said. “You know how many babies were born during the war? They couldn’t write down the time fast enough.” My mother shrugged. This from the person who recently discovered the mistake she made by marrying my father because she’s a Scorpio and he’s a Pisces. “We’re a terrible match,” she’d periodically announce.

Without the exact time of my birth, I exist in metaphysical limbo, unable to have an accurate astrological natal chart which forecasts a person’s life. What mother doesn’t know exactly when her first child leaves her body?

I barely made it into my second month when my Aunt Dora, who lived close by on Virginia Avenue, noticed I didn’t look great. She pinched the skin on my thigh and it stretched out like loose paper. “Rosie,” she said, “something’s wrong.” My mother packs me into the blue-wicker World War II-issued baby carriage for the walk to Dr. Shornstein, the general practitioner who treated our entire family until he died in his late 80’s. He took one look at me, and asked my mother what she was feeding me.

“Milk mixed with water,” she told him.

“Who told you to put water in the milk?” he admonished in a deep baritone. “You’re starving the child. She’s getting half the nourishment she needs.”

Aunt Dora shook her head, “Rosie, how could you?”

My mother stopped cutting the milk, and I rapidly gained the weight I’d lost.

My father took a black and white photograph of me in Parkchester, the housing project in the northeast Bronx where my parents lived after he returned from World War II. I’m standing in a grassy area holding on to a low chain link to prevent anyone from standing there, a smiling, adorable, chubby “eight months old.” My father wrote those words and pasted the historical evidence into our first family album.

Whenever my mother told Dr. Shornstein’s-watered-down-milk story, I waited to hear how grateful she was to Aunt Dora for saving my life. I’m still waiting.

When I was fourteen years old, my mother pointed to her right side with her index finger and explained, for no reason at all, “I was six months pregnant with you when I felt a pain.”

Drawing from her store of medical knowledge, she concluded it was her appendix but decided to notify Dr. Klahr, her obstetrician, anyway. With a sense of urgency he told her to come see him right away. It was after dinner, and my father hesitated, for the briefest moment, before giving up the excellent overnight parking spot in front of our building. Minutes later he pulled up in our cream-coloured Ford sedan and picked up my mother who was waiting on the curb with a packed suitcase in case she had to go to the hospital.

On his examining table, Dr. Klahr felt and pressed, turning my mother this way and that.

“He said he had to open me up, then left me alone to tell your father. Open me up. Could you imagine?”

The next day in Bronx Hospital, the doctor discovered a large cyst in my mother’s right ovary. “That was some tricky surgery,” she explained, “especially those years. It took him three hours to remove it. Then he sewed me back up . . .” Her voice trailed off, unable to separate from the trauma that still resided with her.

One afternoon, trying on clothes in Alexander’s Department Store dressing room, my mother sees me staring at this thick, greyish-purple scar that runs horizontally across her stomach. There’s no need for her to tell me I’m the cause.

When I’m in my late twenties, a rheumatologist gave me a diagnosis of arthritis. I chose to see a renowned naturopathic physician, an ND. After a physical examination involving iridology, an Oriental diagnosis, and questions about my background—Ashkenazi, Jewish Eastern European—he tells me, “In my thirty-five years of practice, you are the most tense young woman I have ever examined.”

Controlling, tight, emotional, sensitive, nervous, yes, but the most tense in his thirty-five years?

“You were born that way,” he said with a smile, his voice reassuring.

I sat stone-faced on his faux black leather examining table wondering what he was talking about. Days later, it hit me. As a six-month old fetus, the clanging noises, muffled voices, and unfamiliar movements to remove what was unwanted in my mother’s body was a profound invasion of my water-tight repose. I was born with jangled nerves.

The naturopathic doctor had unearthed what I might otherwise have never discovered: my psyche was developmentally impacted, irrespective of DNA.

Doomed in utero by a cyst on my mother’s right ovary!

Would I ever know what it feels like to experience moments of appreciable calm? I would have liked to ask my mother. I’d explain to her what the naturopathic doctor told me, but she would have insisted she was responsible, and who am I to make her feel guilty? 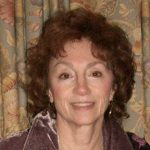 Naomi Weiss is an award-winning non-fiction writer and essayist is co-author of the 1990s Business Week bestseller What The IRS Doesn’t Want You to Know (Villard, a Division of Random House), seven editions, reviewed in Forbes, Kiplingers, The New Yorker, The New York Times, Barrons, Wall Street Journal, featured in Money Magazine. Hedda’s Story, on domestic violence, was a People Magazine cover story, for which she appeared on the Oprah Winfrey Show and A & E’s American Justice. Published works include subjects ranging from banking to technology, real estate to feminism, and alternative medicine to psychology. She attended the Iowa Writer’s Workshop Summer, 2010. Her recent work has appeared in Splice Today, I Come From the World, Montgomery County Magazine, Furious Gravity in the Grace & Gravity Series, an anthology by D.C. Women Writers, honorable mention in Glimmer Train,
and in The Bookwoman published by the Women's National Book Association. She is a member of The Writer's Center, Bethesda, M.D., the Book and Author Group at the National Press Club, Washington, D.C., and the Journalism Institute.

She is currently working on a novel that explores the sexuality and talent passed from Hungarian immigrant parents to three generations of women.

Reflecting on Friendship, Fusion, and Food with J-Rob

How to use those leftover Rosh Hashanah apples

Speedily, and in our days