On October 24, 2021, Rabbi Ariella Rosen and Rabbi Becca Walker exchanged vows at Camp Ramah in Palmer, Massachusetts. Their solemn exchange of promises united them under the eyes of God and marked a ceremonial first in Jewish history: their marriage is the first same sex union between two Conservative rabbis, as Alix Wall noted in the JTA. (A claim verified by Rabbi Ashira Konigsburg, chief operating officer of the Conservative movement’s Rabbinical Assembly). However, as Walker expressed to me over the phone, neither Rosen nor she were aware of it on their wedding day. The first-to-ever-do-it banner is, I presume, an honour, but it is a consequence of their union—it is not their love story nor does it define it. 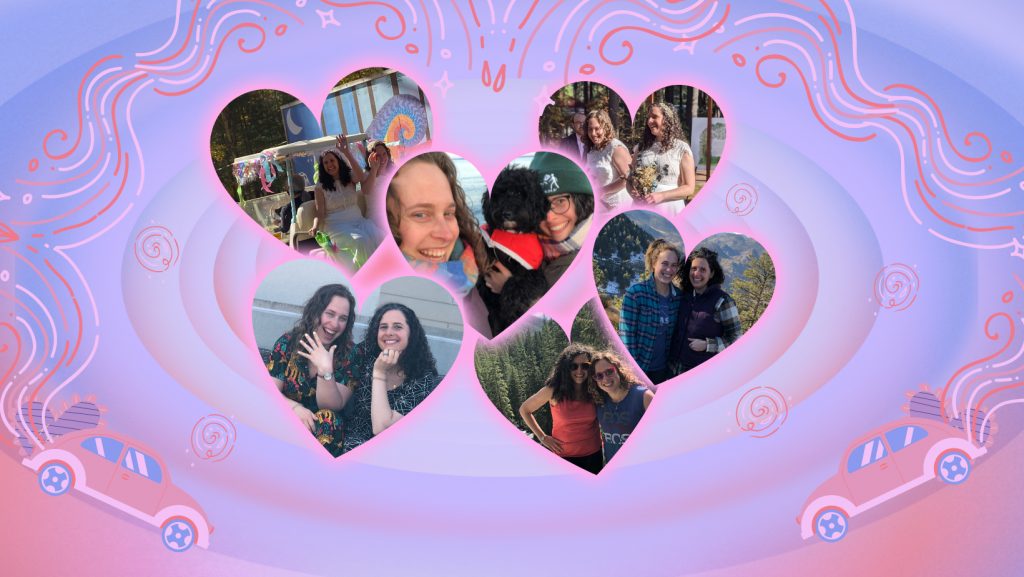 I spoke to the newlyweds as they made their way to the U.S. border from Toronto. Their winter break would be spent visiting Rosen’s family in Connecticut, Walker’s in Massachusetts, along with other East Coast destinations.

“We weren’t thinking we were the first of anything,” elaborated Walker, “I think we might have only realized when we were talking to the reporter [from JTA].”

They could not have known they would be the first, but they always knew, even prior to meeting, they wanted to marry.

As a rabbi who officiated many weddings, Rosen finds “a lot of meaning” in the “ritual and intentionality” behind the event.

When Walker was coming out at the end of university and the first year of rabbinical school, she wondered, “what’s my wedding going to look like? Can you have two brides wearing two dresses?” The idea sounded wild to her until she found a website with photographs of different queer weddings where both brides wore dresses. She thought they looked beautiful. In these images she saw she could have a marriage, “this piece of my life in that way.” 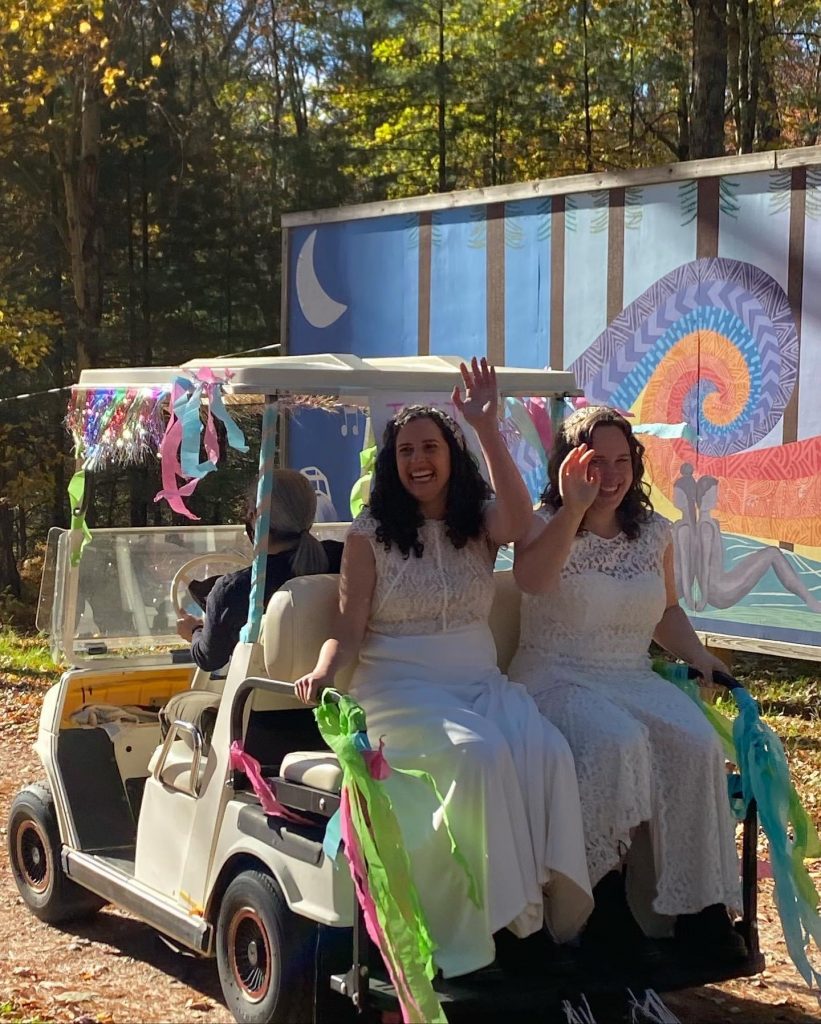 Just married! Rosen and Walker sit on the back a golf cart fitted with streamers at their wedding. Photo courtesy of Rabbi Ariella Rosen and Rabbi Becca Walker.

For Rosen, a part of her coming out process included releasing any assumptions about what she was looking for in a partner. It took time for her to figure out what she wanted.

Walker and Rosen both attended List College, a joint Jewish Studies program between the Jewish Theological Seminary and Columbia University, but never interacted as they were two years apart. And though they have a few close mutual friends, they would not forge a connection until 2018 while attending an early career women rabbis retreat at the Isabella Freedman Centre in Connecticut.

There they started talking and reminiscing about shared university experiences, and noticed they had a lot in common and “hit it off,” Walker said. However, she wasn’t sure Rosen was gay and because coming out was “still relatively new for me,” Rosen noted, “I wasn’t dropping the right hints.” Walker couldn’t help but let out a laugh at this remark, adding that after the retreat “we had an explicit conversation where I asked, ‘what’s your deal?’”

Rosen found the partner she was looking for in Walker. Their deal would soon be a long-distance relationship. At the time Rosen was living in Philadelphia and Walker in Michigan. Their first date was two months after the retreat, and entailed Rosen driving between 11 to 12 hours to see Walker. The vehicle, after all, offered an easy method of escape if things went terribly. There was some awkwardness on the first day, but it was fun, Walker recalled. Their first date lasted five days!

Adventurous outings and travels soon followed. From the beginning it was “really easy,” said Rosen. Being in a long-distance relationship allowed them to find out if they were compatible early on because they weren’t going out for a few hours. When they were together it was as if they lived together, and when they were apart it encouraged, Walker said, open communication, because it was all they had. 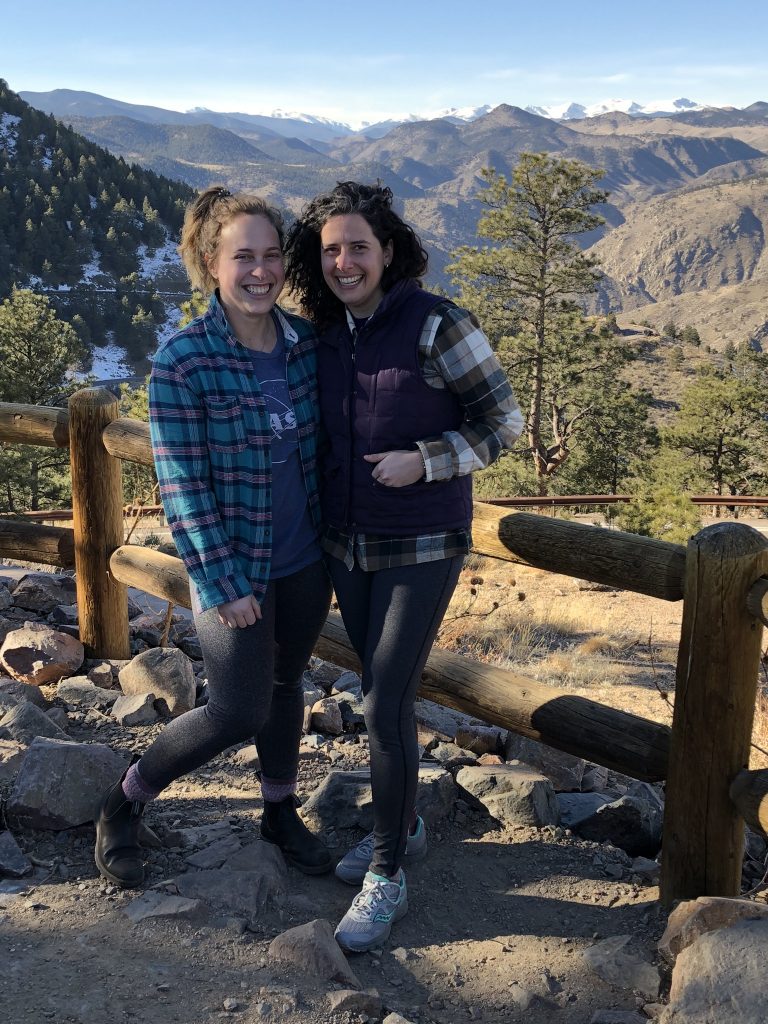 Walker and Rosen out on the trail. Photo courtesy of Rabbi Ariella Rosen and Rabbi Becca Walker.

Funnily enough, Walker did not want to date another rabbi. Though she noted it can be wonderful to have a shared investment in Judaism in a relationship, she knew from past experiences it can also be hard career wise. In many places there are only jobs for one rabbi.

When the border closed due to the pandemic, Walker had already moved to Toronto (six months prior), and Rosen was living in New York. After speaking with a lawyer, they found out the only way Rosen could come to Canada was if they married. They wanted to have the marriage conversation before this happened, but the possibility of not being able to see one another propelled them into action. They decided to get civilly married.

In the meantime, Walker returned to the U.S. and she and Rosen moved in with Rosen’s parents and brother in Connecticut. “It was the typical story: we thought we’re going to be there for three weeks, and then we ended up there for four months,” Walker said chuckling, with Rosen joining in. It was there that Walker got to see how Rosen “nurtures those relationships and her kindness, and how giving she is to her family but also to everyone.” It was the first time they lived together, the next, would be in Toronto, where they built their home.

At their friend’s apartment’s rooftop in Brooklyn, they got civilly married and publicly engaged. Their official wedding day would be a Jewish celebration, as they didn’t want the civil ceremony to “count for the experience of our relationship,” Rosen stated. 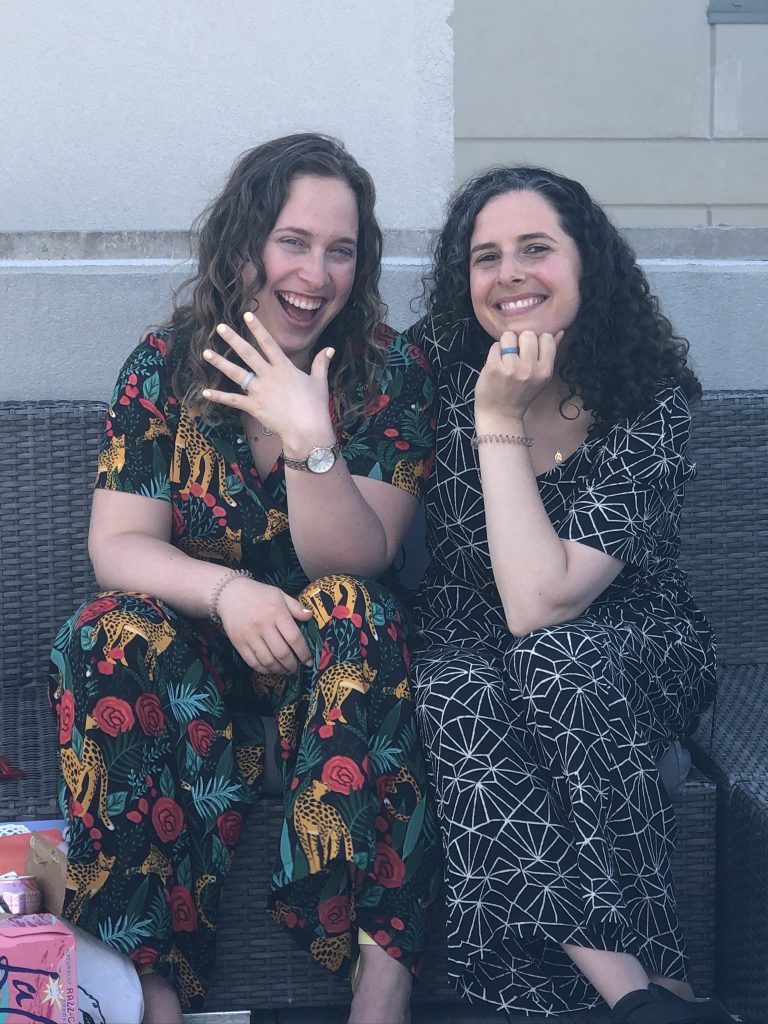 In the months leading up to the wedding, Walker didn’t expect to have an amazing time. “The lead up was stressful, so I was like let’s just do this, let’s get it over with and then it was the best day ever. It was so fun because all of your friends are there and they’re loving on us, and you’re like, ‘Oh My God, I’m getting married.’”

Everyone, Rosen and Walker agreed, in a back-and-forth manner, should deserve to be showered in love by their friends, whether or not you are getting married.

“I was surprised,” added Rosen, “by how planning a wedding can be an expression of your values,” from gifts to guests symbolizing warmth, to thinking about how to manage waste, to what materials were going to be used. “We got to consider and talk about how to make sure that these decisions reflect what we care about.” For example, they were prepared to use camp dishes because they did not want to use a slew of disposable items that would have been thrown out at the end of the day.

Now settled into their relationship, their marriage, their home, it has been concluded that Walker is the messy cook, Rosen is terrible at multitasking and can also be too accommodating, as Walker jokingly remarked to Rosen, “be less accommodating.” But it’s Rosen’s niceties, like getting off the couch to get her wife water, that invigorate Walker to do more things of the same nature and think about how she can be more kind. 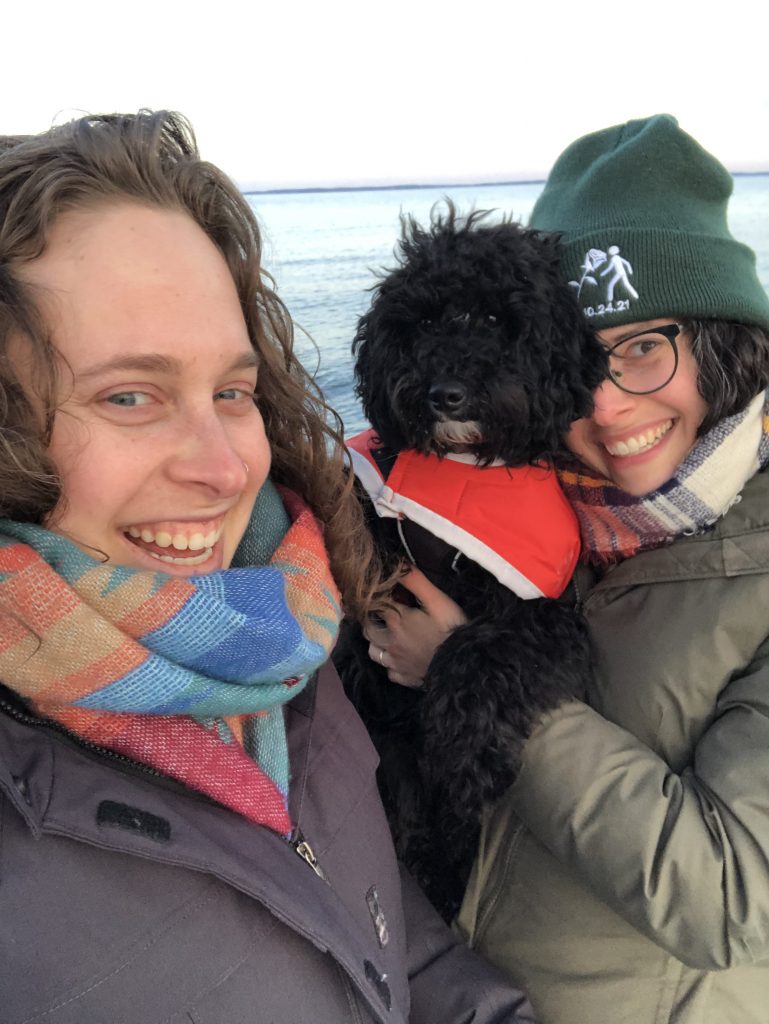 Walker pushes Rosen as well. “I’ve grown and changed and become a better version of myself in large part because of our time together.” If Rosen used to not need something that could bring her joy, she would not always take the chance to experience it. That’s why she admires Walker, not only because she is more decisive, but because she “pushes me to do that a lot more often than I would be inclined to do for myself and I really appreciate how that makes life better.”

Romantic love can be an enigma. Understanding it can feel ephemeral. Love stories don’t have to be soap operatic tales to be worth reading. How people found love, pursued it, chose to build a life with someone because of it, offers us the sweet opportunity to spend some time away from our own complexities, and in the magical happy-ending love of strangers. And Rosen and Walker’s tale is no different.

Expanding our systems with love