Since its inception in 1999 the Jewish Heritage Centre of Western Canada (JHCWC) has played a seminal role in documenting, preserving and disseminating information and knowledge on the culture and history of Jews in Western Canada. In addition, through the Freeman Family Foundation Holocaust Education Centre, the JHCWC promotes the awareness and understanding of the history of the Holocaust through education—reaching thousands of students and educators each year. We address the fact that society continues to witness genocide due to continuing racism and hatred and that we must all be vigilant in opposing racism, antisemitism, and other forms of bigotry.

The JHCWC was not created in a vacuum. Its formation was the culmination of years of intense, exciting and fundamental intellectual activities that benefited both the Jewish and broader communities. One of the founding components, the Jewish Historical Society of Western Canada, which was created in 1968, was at the forefront of encouraging and developing research projects that explored all facets of Jewish social and cultural life in Western Canada. Through these initiatives, the Jewish Historical Society brought to the fore an understanding of issues, events and social processes that produced a dynamic and comprehensive picture of Canadian Jewish identity. It encouraged a pluralistic, culturally textured definition of said identity which incorporated religious and secular humanist traditions, and identities based on gender, class, and language.

The JHCWC has carried out its objectives through a comprehensive process of networking and dialoguing with individuals and organizations within and beyond the Jewish community. This exercise has not only created a greater awareness of the complexities and nuances of the Jewish social and cultural experience, it has also added immensely to an appreciation of the multicultural fabric of Canadian society. It has helped to strengthen the belief that cultural pluralism is a key ingredient in shaping democratic institutions. And as adumbrated above, central to this remarkable odyssey have been the activities emanating from the Freeman Family Foundation Holocaust Education Centre which with great intellectual adroitness and moral resolve has advanced the cause of Holocaust awareness and human rights advocacy by appealing to a universal sense of civic responsibility.

Empowering the community in an educational and cultural sense is what the centre strives to accomplish. It is a gathering place for people seeking to make sense of their lives in relation to the past and present. It tries to engage people in a learning process that activates all their senses. For the JHCWC, dialogue is the vehicle by which people aspire to reach their full intellectual and creative potential and to satisfy the range of emotional and psychic needs. Through the many activities offered, we encourage critical thinking— which means to understand why things happen and how they develop and change over time. We foster an environment that is conducive to sharing in the memory and meaning of a particular era, locale, event, personality, and more. We encourage our audiences to explore the multiple identities that make up Jewish culture (religious, secular, social class, gender) and ask them to situate themselves within any or all these identities or come up with others that we have not considered.

And yet nothing can compare to  the emotion of an individual who has located in our archives the photograph of a parent they never knew, or for that matter the elation of a student who has found an important document for their research project. Nor can it describe the stunned looks of students listening to the almost surreal presentation of a Holocaust survivor.

By continuing to bring to full realization the extent of our mandate and to complement traditional approaches to presenting information with new techniques we will continue to elicit awe, wonderment, skepticism, contemplation, reflection; in short, the full range of emotions, behaviors, and attitudes that the search for knowledge creates.

Header image is of the Victory Ball at the Royal Alexandra Hotel, Winnipeg, 1918, courtesy of the Jewish Heritage Centre collection. 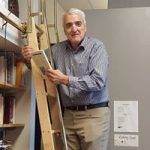 Stanislao Carbone was born in San Giovanni in Fiore, Italy in 1957. He came to Winnipeg in 1960 and received his M.A. in History from the University of Manitoba. He has written two books on the history of Italians in Winnipeg. He received the Prix Manitoba Award for producing a documentary on the Italians in Winnipeg. He is presently the Director of Programs and Exhibits of the Jewish Heritage Centre and is also the Vice Consul of Italy.

Hidden Legacy: in the footsteps of the Jews of Sefarad

It can happen to anyone: dispelling the myths around abuse