Have you ever had an experience where you felt like you weren’t “Jewish enough” or felt inadequate in some Jewish situation? Same, and I want to talk about it.

There is a common story many people have shared with me, which takes place on Shabbat. Honestly, I think it may have happened to me as well, but I must have repressed the painful memory. Sara* is at a Shabbat dinner at her friend’s house, with many other guests . After they make kiddush (blessing the wine or grape juice) most of the guests get up to ritually wash their hands. Sara is unfamiliar with this ritual since it’s not done in her house. But she goes along and uses the special washing cup. While waiting for everyone else to wash, she turns to the person standing next to her and asks how their week was. She is greeted by silence, and figures maybe they didn’t hear her so she asks again, and the response is some gesturing while other people around her turn to look.  Sara realizes everyone else who washed their hands is quietly waiting.  She becomes extremely embarrassed she didn’t know the rules and why they exist in the first place. It seemed like everyone else knew what to do at that moment. Where had she gone wrong?

Here is the thing, she didn’t do anything wrong. Yes, Sara didn’t know about the Jewish practice of refraining from speech between the ritual hand washing and saying the blessing over challah, but that was not a shortcoming on her part. A lot of people don’t perform this practice or aren’t familiar with it; more learn about this step after experiencing  embarrassment from speaking  to a room of silent people.

I’ve had many of these experiences where I doubted myself and my Judaism. In my first year of university, I ran out of a room after I accidentally hit a light switch. I turned off the light in front of a group of people who don’t touch anything electric on Shabbat. It was obvious I had done it, the whole room went dark. I didn’t know what to do at that moment, so I just left. Or another incident was the time I volunteered to lead havdalah (the ritual ending Shabbat) and found out there was a whole piece of liturgy that was a part of the more traditional version of the service I didn’t even know existed. I, like Sara, and so many others I’ve spoken to, have felt inadequate as a Jew because I did not know certain rituals.

Approaching my fifth year as a rabbi, I have heard so many stories about this in the community. It feels like it is almost a universal experience, and I’m here to say YOU ARE ENOUGH. We are all on a learning journey, whether that be about aspects of Jewish ritual or culture and beyond. There is so much to learn in Judaism, it’s impossible to know it all, and that will lead to moments where we make a mistake or we question ourselves. Since almost everyone has (at least) one of these stories, I’d like us to collectively let go of our doubts and/or embarrassments, and the questioning as a result. We have enough sources of guilt and shame, and one of my guiding points as a rabbi is to try and eliminate those feelings occurring around Judaism and Jewish practice.

When I started rabbinical school, I wanted to try wearing tefillin. I borrowed a set from my school, but was too embarrassed to admit I didn’t know how to put them on. Instead of asking a teacher, I searched YouTube and learned how to wrap tefillin from a video. By taking this route I missed out on a special moment of learning; since there are different ways to wrap tefillin around one’s hand, you carry the tradition of the person who taught you. My custom for wrapping is based on some random person from the internet, instead of the method of a teacher I had an actual relationship with. I have since had the pleasure of teaching others how to put on tefillin, and it is always special for me to share.

Just because I am a rabbi, does not mean I have avoided these situations and feelings of inadequacy. We all have a lot to learn and teach. Let us make an agreement not to question our worthiness as Jews when we don’t know something, and in turn, to not question others’ worthiness when they don’t know a tradition or fact that we know. Environments more accepting of uncertainty or mistakes will make for a stronger and more beautiful Jewish community.

* The name has been changed for the story. 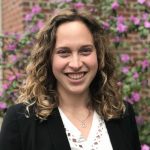 Rabbi Becca Walker is finishing up her second year as the engagement rabbi at Beth David in Toronto. Prior to that she served as the Senior Jewish Educator for Michigan State University Hillel and the Hillel Campus Alliance of Michigan (HCAM), collaborating with and empowering university students across 11 campuses. She has been an educator for over ten years, teaching at Hillels, religious schools, summer camps, adult learning initiatives and more. She has a passion for learning Jewish texts and finding ways to make them relevant and approachable for Jews of all different backgrounds.

Rabbi Walker earned her rabbinic ordination from The Ziegler School of Rabbinic Studies in Los Angeles in 2016. She is a lover of all things shabbat, and also enjoys going on outdoor adventures. As an avid podcast listener, she is always happy to hear and share podcast recommendations

It can happen to anyone: dispelling the myths around abuse