On September 18, 2001, the synagogue’s security guard searched my fuzzy-leopard-print handbag for weapons.

It had been one week since New York was attacked by aerial violence, and it was the first time I ever saw security guards in a synagogue. Usually on Rosh Hashanah, the glass doors were fortified by an old man who checked tickets, rhythmically squeaking Shana Tova as congregants shoved their purple High Holiday passes directly at his face. Hundreds flocked past him, wrought-up over sanctuary seating, jousting with tallit and machzors, but never a weapon.

I remember the guard’s flashlight exposed my Tic Tacs and plastic-wrapped honey cake. He waved me through. I joined my grandfather and dad at the same seats we sat in every year, next to the memorial plaques for our family—all of them died in the Holocaust. I kept an eye on the emergency exit straight ahead of me. Throughout the service, I couldn’t help but think that an intruder would enter the chapel; he’d be unaffected by the new security as his machine gun would obliterate the congregation who had just spent their last gasps on prayer. The scene in my head is a re-envisioning, in many ways, of the terror I imagine my ancestors faced in Krasnik, Poland.

In 1939, on the second day of Rosh Hashanah, under the threat of the Nazi regime, my ancestors went to synogogue. During the service, the town was invaded by Nazi soldiers who enclosed the building. As Jews exited, they were ordered to stand outside, indefinitely on display. A week before, the Germans bombed Krasnik. Jewish families knew it was dangerous—many had already begun making plans to flee to Israel or to the mountains—yet, they continued to gather for the holiday.

Ever since 2001, I have experienced heightened anxiety on the High Holidays. This state of intense nerves is known in Yiddish as shpilkes; for me, it forms into the sensation that everything is spinning out of control.

When we gather publicly in groups for religious observance, I fixate on the probability of an antisemitic attack and my paranoid imaginings provoke a state of personal chaos. After all, since October 2018, the holidays have been haunted by the unforgettable Pittsburgh shooting, where 11 Jewish worshippers were killed at the hands of a man whose public motto was, “all the Jews must die.” Sometimes it feels wrong not to be afraid.

In 2020, due to COVID-19 restrictions, I stayed home during the holidays and I didn’t feel my usual High Holiday anxiety. But this year, as I prepare to return to in-person services, my shpilkes is on high. Because of this, I decided to survey my friends and family to better understand the validity of High Holiday shpilkes (I know this is a very small survey and it does not speak to the general Jewish population). Out of 22 participants, 50 per cent were ages 45-60, and 50 per cent were ages 19-44. The majority, 64 per cent, descend from Holocaust survivors, and the remainder either don’t have Holocaust ancestry or aren’t certain. A combined 74 per cent describe themselves as conservative or reform, with 18.2 per cent as modern orthodox.

The first portion of the survey asked participants to comment on the meaning of the holidays. Are they spiritually significant to the participant? If not, how are they endowed with personal value?

All of the participants described the holidays as a time for renewal. For almost every answer, Rosh Hashanah and Yom Kippur specifically provide important pauses for reflection, repentance, and change. As one participant said, “it’s really a feeling of ‘newness’, of familiarity and tradition.”

Almost every participant associates the holidays with family. Many in the survey said they observe Rosh Hashanah and Yom Kippur because of family. In new families, parents have returned to services to establish their child’s Judaic future. People who are estranged from their families have completely stopped celebrating. For older individuals, observance occurs infrequently because they’ve lost their parents. Still, the survey revealed an overall consistent commitment to our ancestors.

Evolutionary psychologist, Randolph M. Nesse, defines anxiety as an ancestral physiological “smoke detector.” Our minds beep at sensed predation, and over time as we learn more about our predators, we pass down our corresponding fears to our offspring. All of us inherit victimhood and fear. But some of us are instinctively more reactive. Nesse suggests combating high anxiety by conditioning our nervous systems to stay calm. As he explains, if we can routinely disrupt our panicked thoughts with therapy or medication, we can slowly train ourselves to relax. In his book, Good Reasons for Bad Feelings, he describes “opportunity costs” of anxiety as the valuables we may lose if we are constantly reacting to our fear. If we avoid synagogue at the mere thought of antisemitism, we will face a malnourishment of our own.

When I watched a digital service last year, I stared partially out the window, and partially at the giant spoon and fork hanging on the wall behind the congregant who was reading the parsha. I texted my boyfriend to let him know that I was slowly losing my mind (even at the sound of the shofar, an intended wake up call, I was asleep on the couch). I may have been free of worry but I was also alien to my own holiday.

The second half of the survey was dedicated to questioning peoples’ fear of antisemitism. All participants described themselves as being very informed or somewhat informed of antisemitic activities. Almost everyone experienced at least one antisemitic event. More than half— 54.5 per cent—reported that they’ve been attacked “a few times” and 22.7 per cent stated they’ve been victimized “many times.” Half admitted they feel some fear on High Holidays, most of which report that they have experienced antisemitism in the past and that they are on high alert for antisemitic or anti-Israel news.

The other half stated they don’t think about it—most who expressed this sentiment stated they never witnessed or experienced antisemitism. One participant shared he isn’t focused on antisemitic issues because “the world is so complicated right now and there are threats to so many communities of so many different people it’s hard to know who the white supremacists are hating this week.”

The most validating and inspiring answers came from individuals who worship in environments facing a tangible threat. One individual remarked that their synagogue can’t accommodate large numbers of people. Therefore, they sit in a park, on display to surrounding non-Jews, many of them “gawking.”

Outside of Canada, my cousin described the discomfort she faces living in Charlotte, North Carolina. “All of our Jewish life is on one campus—Shalom Park. If anyone wanted to do any harm, it would be quite easy.” She’s inherited shpilkes from her bubbie, who worried about their community in Ohio, who used to say, “if someone wanted to hurt all the religious Jews in Cleveland, all they would have to do is come to Green Road on the High Holidays.’”

After conducting the survey, I searched through the web databases of The Anti-Defamation League (ADL) and B’nai Brith. Some reports have calmed my shpilkes. For example, in 2016, Yehudit Barsky, chair of the Community Security Strategy, published a report entitled Terrorist Incidents and Attacks Against Jews and Israelis in the United States 1969-2016 which stated, there is no consensus that most of these attacks take place over the holidays. Similarly, The UK’s Community Security Trust (CST) 2016 Incident Report found that antisemitic incidents aren’t necessarily concentrated during the High Holidays but are spread throughout the year, most likely linked to growing hot pockets of the Internet devoted to blaming Jews for social discord.

However, some incident reports intensified my worry. Last year, when we were all stuck at home watching digital services, the World Jewish Congress reported attacks against Jewish property across Europe, including swastikas on mezuzahs, antisemitic graffiti on kosher restaurants, and an in-person attack at a synagogue in Hamburg, Germany. Closer to home, B’nai Brith reported three significant attacks in Ontario. In one instance a father and son were outside a synagogue, when a man yelled, “You’re a piece of shit, you’re Jewish, you run the fucking world,” right before the assailant approached the family’s vehicle and attempted to stick his hand in the car window. Most of these attacks occurred when no one was around or when the victims were alone.

I have only suffered a verbal antisemitic attack once, and it was when I was alone. I’ve been teased and humiliated but never physically attacked. My entire basis for fear derives from social media posts from Jewish anti-hate groups, CNN’s intense coverage of the 2018 Pittsburgh shooting, and the 2017 Unite the Right march in Charlottesville, Virginia.

Despite my panic, it’s clear that we are safer in groups. Nesse tells us that religious groups are apt for survival because we are built on moral and emotional commitment. When something goes wrong, we are likely to help each other. Barsky’s report suggests that our most promising course of action is community patrol and community-trained security. We cannot stop gathering. Instead, we must rely on the group for survival. My feelings of vulnerability aren’t even benefitting me.

The cost of fear is extreme. Underneath my honking smoke detector I hear the whisper of a survey participant’s reply, “I believe I have an obligation to participate in and actively live my heritage . . . [I have] a responsibility to carry it forward into future generations.”

Wake up, screams the shofar, the holiest of alarms. Wake up so that we can stay here. 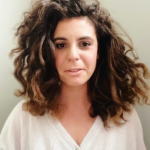 Rachel Ganz is a Canadian Jewish playwright and essayist. She holds a Bachelors of Science in physical anthropology from the University of Toronto as well as a certificate in playwriting from The National Theatre School of Canada and she is the 2015 recipient of the Sybil Cooke Award for her play The Dumb War . Rachel is currently pursuing her MFA in creative nonfiction with her memoir Where the Panic Goes: A survival and a haze.

You're invited to The Torah Studio