I had two similar experiences that resembled coming out over the past decade or so. One was actually coming out as queer. The other, which happened a few years prior, was when I was finally ready to proclaim my desire to apply to rabbinical school and become a rabbi.

Over the course of several years, I slowly started to realize essential qualities about myself and how I wanted to show up in the world. I kept that realization to myself for a long time. When I was finally ready, I cautiously shared the news with a small inner circle of trusted friends and family, and slowly expanded from there until it just became something that was known about me: I am a rabbi, and I am queer.

I received similar reactions to both self-revelations as well. The most common response to both my pursuit of the rabbinate and being queer? “Yeah, I kind of figured.” My response? “Come ON!” So much for sharing a revelation.

I know how lucky I am, especially in getting that response to my actual coming out. I know how dangerous coming out can be for so many, and the painful aftermath. I would never seek to minimize that. (And if you are someone who is not out, please know that you are still very much a part of the LGBTQ+ family, and are beloved.) And yet, in both comings out, I was left a little frustrated alongside feeling grateful and seen and loved. How was it that other people seemed to know me better than I knew myself? Why did it take me so long to figure it all out? Why couldn’t someone have saved me some time and told me who I was becoming?

Part of the challenge, I suppose, is I didn’t see myself in a lot of the role models in my life. Many people, including several rabbis (one of whom is my father) have changed my life for the better, yet while I admired them, I didn’t see myself in them. Few were women, and even fewer were queer. Perhaps I couldn’t see who I was becoming because I never got to have my ring of keys moment. Rather than recognize myself fully in another human being, I sort of pieced things together slowly until it all made sense.

What happened at first accidentally and unconsciously as I figured myself out, I now try to do intentionally: to be the role model I wish I had had. Maybe I can be that flash of recognition for someone else. Being a rabbi and being queer are inextricable pieces of my identity, and to show up in the world embodying one without the other would be dishonest.

Perhaps a natural question might be how do I not experience any sort of dissonance in holding these two identities together? Jewish tradition and Jewish community have not always been kind and welcoming to the LGBTQ+ community (to put it mildly). Many challenges persist today, and I know many who do not feel they can show up fully as both Jewish and queer in their communities.

But I don’t know how to do it any other way. I am diminished if I do not emphatically affirm these two components of who I am belong together. (I also recognize there is a certain privilege that comes with being a rabbi. I get to have more say in creating a welcoming and affirming community culture.)

There is one teaching in particular that I constantly return to. The creation story at the beginning of the Torah speaks of two different sets of time created on the first day: day and night. Day (yom) is when there is light, and night (laila) is when there is no light. Yet, two additional terms mentioned there are “morning” (boker) and “evening” (erev). Day doesn’t become night with the flick of a switch. There is a gradual shift from one to the other, and back again the next morning. That transitional time is arguably the most beautiful time we have. The sky lights up in beautiful colours, and different creatures emerge. The air feels special.

This in-between time gave rise to a Hebrew term for twilight: bein hashmashot (literally, between the suns)—this period has become especially auspicious in Jewish time. A new Jewish day begins at twilight. One tradition suggests bein hashmashot was when God created some of the symbols most essential to the stories of the Bible, including the rainbow that appeared in the sky after the flood. And perhaps most beautifully, twilight was deemed the only time of day that gets to be part of Shabbat twice. (Shabbat traditionally begins slightly before sundown on Friday, and ends after dark on Saturday, leaving the special day of rest with two twilights.)

In their roles as interpreters and legislators of Jewish law, ancient rabbis could have forced twilight into a category. It would have been easier to call it simply “day” or “night”. But they didn’t make that choice. They allowed twilight to exist as its own auspicious and sacred time. And when they weren’t sure what to call it, they decided to call it holy.

Rabbi Reuben Zellman, one of the first openly trans people to become a rabbi, realized the power of this in-between time in his prayer entitled “Twilight People,” which specifically honours trans identities (and which still feels deeply meaningful for me to encounter even as a cis-queer person):

We are all twilight people. We can never be fully labeled or defined.

We are many identities and loves, many genders and none. We are in between roles, at the intersection of histories, or between place and place.

We are crisscrossed paths of memory and destination, streaks of light swirled

together. We are neither day nor night.

We are both, neither, and all.

We are all holy, all worthy of the beauty that twilight offers. In the end, I’m glad others saw that to be true for me, even if I wish I had beat them to the realization. As I continue to uncover myself, I feel grateful I get to move through this world as a queer rabbi. It is the most “me” I can be.

The other day, stuck at home due to post-travel quarantine, I sat on my balcony watching the sunset. Despite not being allowed to leave my apartment, I felt a deep sense of expansiveness as I watched the colours brighten then fade to darkness. I feel it every time I watch the sunset (and the very occasional sunrise). It’s our sacred daily reminder that there is space for all of us in our beautiful, glorious full selves, whether we recognize it ourselves or others see it in us first. 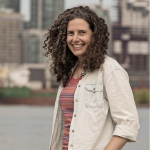 Rabbi Ariella Rosen is the Senior Jewish Educator at Hillel U of T. She moved to Toronto from New York City, where she previously worked as the admissions director for the Jewish Theological Seminary, where she received her rabbinic training. She has training in experiential education and community organizing and spent a few years working as a congregational rabbi in Philadelphia. Rabbi Ariella lives with her partner, Rabbi Becca Walker, and enjoys exploring Toronto parks.

Stepping into the archives: a curated look into queer Canadian history

High Shpilkes: can antisemitic hostility cost us the High Holidays?