Chayka Moskovitch (Dalia Wolfson) has recently turned into a vampire and does not know what to do. Over a creepy klezmer score, by Zara Fox, Moscovitch divulges her comically vampiric tale to Rabbi Vineberg (Shuli Elisheva). She expresses concerns over how to lead a Jewish life when all she desires is to drink people’s blood. Set in playwright and director Rebecca Turner’s hometown of Montreal, and inspired by Turner’s love for Buffy the Vampire Slayer, her play Blut und Blintzes (Blood and Blintzes) comically explores faith and vampirism.

The yiddish play premiered on April 20, 2021 as part of the Museum of Jewish Montreal’s Microgrants for Creative and Cultural Exploration series. Originally written in the style of a radio play, Turner adapted the work to cater to the visual medium of Zoom.

When Turner is not deep in the fictional bloodlust world she created, she attends McGill University, interns at KlezKanada, and performs ventriloquism with Smoulder the dragon.

I sat down (virtually) with Turner to learn more about the play’s development. At the end of Blut und Blintzes, as soon as Rabbi Vineberg thinks Moskovitch has left she phones a friend to gossip about what Moscovitch shared with her. No one will blame you if after reading this interview, you also can’t help but gossip about an exciting (and slightly terrifying?) alternative universe where Jewish vampires roam the streets of Montreal.

Do you often connect your Jewishness to your work?

I feel like I marry my Jewishness to everything I do sort of accidentally but also very purposely. It’s a fun mix of the unconscious and conscious mind just going at it.

Is this the first time you’ve written creatively in Yiddish?

I have written little stories for my own amusement, especially when I took summer courses at YIVO, and The Naomi Prawer Kadar International Yiddish program in Tel Aviv. I would write stuff with my friend, Kaley, who was the technical director for Blut und Blintzes. We met through the Tel Aviv program and we wrote a little skit together and I ended up directing it. But never anything that I thought yes, I’ll put this on professionally.

Have you always been a fan of fan-fiction?

I find it highly entertaining. When you love something so much why not continue to explore it and read more about it and write more about it? I love the idea of the rabbi also being one of these people because I really like the idea of juxtaposing them to this smutty and weird genre.

There’s also status that comes with different dialects, did you have that in mind when writing?

I speak YIVO Yiddish, but I wasn’t looking for actors to only speak YIVO Yiddish. What I did was I tried to write the rabbi’s dialogue with as many Loshn-koydesh words as I could, because that is what rabbis speak like, they use more words that come from Hebrew.

Shuli and Dalia brought in the dialects and made this really fun dialogue. At one point, Shuli started correcting Dalia and Dalia responded in the same correcting tone and Dalia kind of pulled that out of her hat one day, and I said, “Dalia, that’s amazing we’re going to have to have it here.”

Did you always know you were going to set the play in Montreal?

I can’t imagine it anywhere else at this point. They’re Jewish Yiddish speaking vampires and they’re in Montreal, and these are facts of existence. At least within the play I like to imagine it is real because it is our world, just vampires exist and also everyone speaks Yiddish.

Maybe it’s because I have grown up here and my family has been here since the early 1900s but this is the centre of Jewishness for me. This is like the Jerusalem of Canada, oh G-d, I can’t believe I said that. That’s too much sincerity for me.

(Interviewee would like it to be noted that she gagged after she said this.)

What did Zoom offer that wouldn’t have been possible otherwise?

I was actually thinking at the time how lucky I was that this was on Zoom not because I don’t think I could have found anyone in Montreal, but getting to work with Dalia and Shuli was an amazing opportunity that I wouldn’t have gotten to do otherwise, and working with my friend Kaley who lives in California.

We also got to put it on in more of a theatrical manner than I expected because it was always supposed to be a table read. But when we started rehearsing I realized, oh my gosh, we could add costumes and literally play with set and make-up. 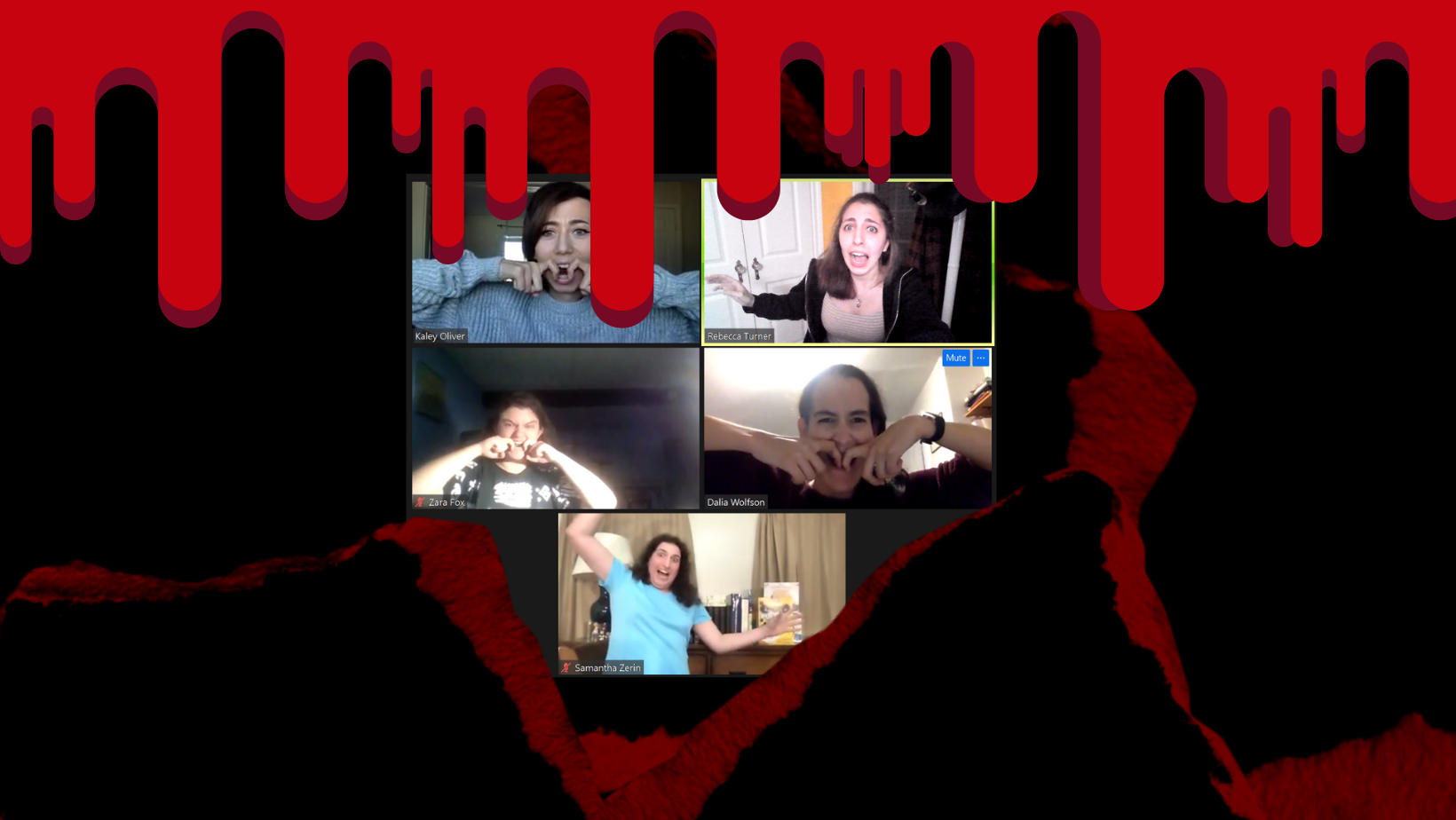 There’s a really great moment where Chayka is saying how it doesn’t bother her that she’s a vampire, what bothers her is how she reconciles being a vampire with her Jewish spirituality and identity. Is that something you yourself would think of?

There’s a lot of Chayka that’s based off of me, I wrote her with myself in mind. I thought I was going to play her and then I realized that that would be insane because I was in the middle of exam period. I don’t think being a vampire would change how I would live most of my life, I could get a degree online, concerts are after dark, most of winter here is dark, all the fun things happen after dark a lot, I also don’t like the sunlight. The only thing that could be a problem with being a vampire is Yom Kippur, what am I going to do, stay inside? At home? That makes me feel a little bit anxious. What would God think?!

I got to collaborate with these people who are very knowledgeable. Shuli is a Yiddish teacher, and also very creative. She does all of this sci-fi fantasy stuff in Yiddish, Dalia is doing a graduate degree in comparative literature, and Zara and Kaley are very knowledgeable in their own work. We were able to all come together and appreciate each other for what we had, and talk it out. Their interpretation was just as meaningful, and sometimes more important than my own. If they understood the intent of the line or were able to give a justification for their own version of the intent, awesome, great, do it your way, but it was also important to keep the comedy sharp. 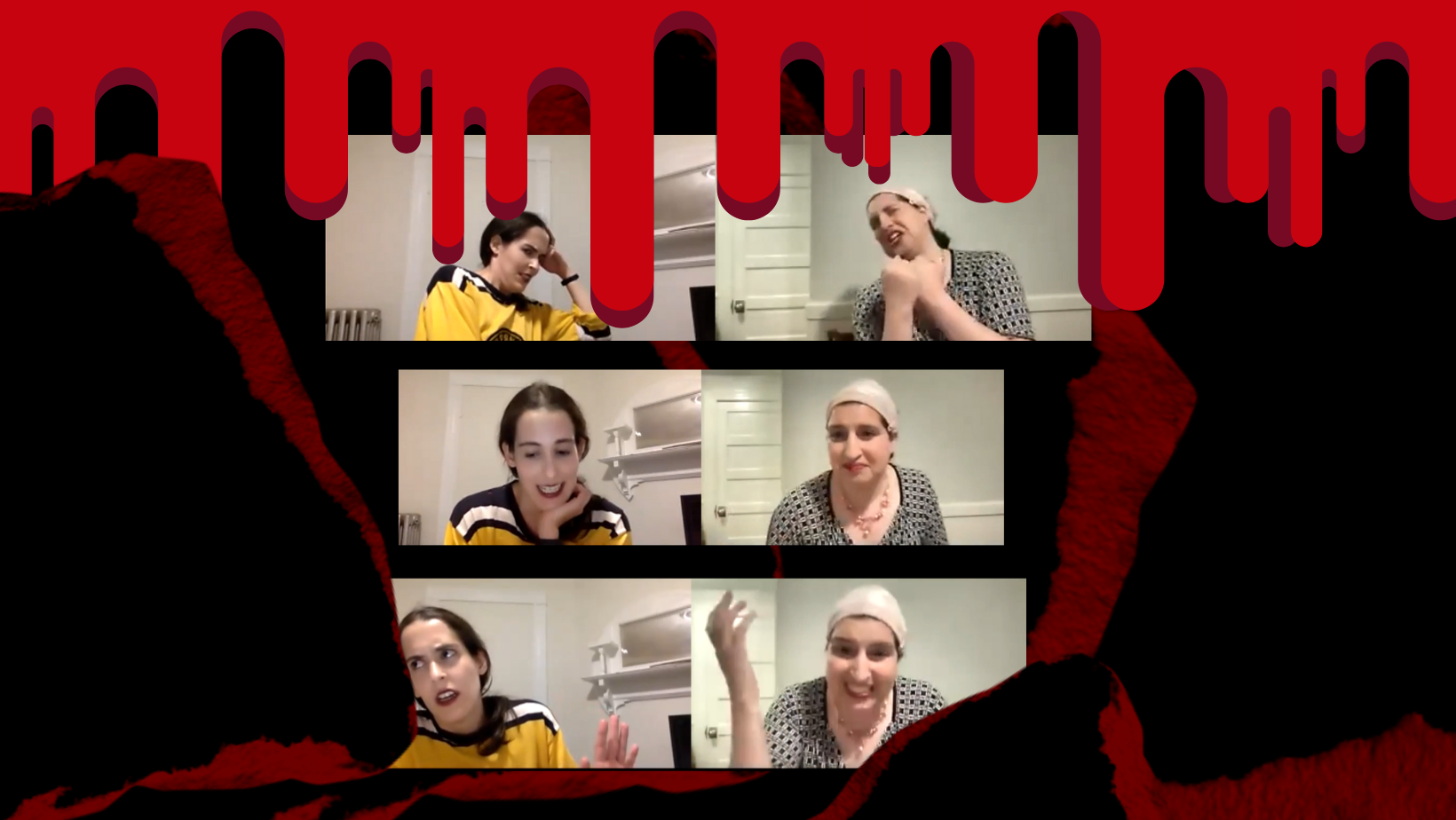 It must have been nice to have your microgrant cohort with you as well.

I really learned a lot from everyone, we were all at different stages of our projects when we were meeting.

What did working with the Museum of Jewish Montreal bring to your work?

Anya and Alyssa are two incredible human beings. Wow, are they great at their jobs. They really helped me stay on track because they were my liaisons. The museum would send a person per week or so to talk to us about different aspects of the project, all incredibly helpful and illuminating and an amazing experience. I’m more of an artist, I don’t handle money, I lose money, I don’t make money, so learning how to use the spreadsheet they gave us, I’ll be using that for the rest of my life. That was insanely helpful, and Anya and Alyssa always had the best questions for me. I wouldn’t have written my play, at least not in such a short period of time, or very efficiently, without them

Can you tease a sneak peak for the second part of Blut und Blintzes?

I haven’t written the second part yet, but I can tell you what I have planned. It’s going to take place at Blood Suckers Anonymous. I’ll tell you one joke I do know is somehow going to make its way in. This takes place in the winter, so Chayka walks into this Blood Suckers Anonymous meeting, there’s only around three people there and she’s just like, “Where, where is everyone?” And the vampires are like, “well, you know, it is winter”.  “And??” she responds, “that gives us longer nights, that’s good”, and they say “we’re all old, all the other vampires are in Florida, use your common sense.” That’s going to go in somewhere,  this general idea of vampires are old and therefore they enjoy vacationing in Florida.

And the irony of that is that Florida is hot and sunny.

The call to Florida, even when you’re dead: you still must go to Florida. You must winter in the tropics.